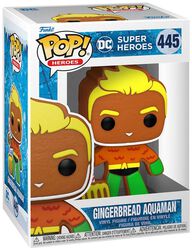 Faster than a shark, stronger than the seven seas put together, and more charismatic than Poseidon himself: that’s Aquaman. Since the 1940s, the hero with the trident has been attracting comic-book fans from all generations.


Aquaman was first depicted by Mort Weisinger and Paul Norris, two American comic book authors, and made his debut in November 1941 in an edition of ‘More Fun Comics’. Originally Aquaman was only intended to be a side character, but thanks to his increasing popularity he eventually got his own comic series. In the 1950s, Aquaman became a fixed part of the ‘Justice League of America’. Aquaman wasn’t always a DC bestseller, though. In fact, quite the opposite: many DC fans simply couldn’t take Aquaman, with his tight orange outfit and green trousers, seriously. The fact that he has the ability to talk to fish didn’t exactly help, either.


All this was to change, however, when the Aquaman comics were updated in the year 2011, and author Geoff Johns together with artist Ivan Reis breathed new life into the Aquaman saga. With its exciting stories about Aquaman’s rise to leader of Atlantis and detailed drawings in which Aquaman also got a new, up-to-date look, the comic series finally got its breakthrough.


Aquaman, aka Arthur Currie is the son of Tom Currie, a lighthouse keeper and Atlanna. One stormy night, Atlanna is washed up on the coast, where Tom finds her and saves her life. Two weeks later the pair marry and one year later their son Arthur is born. Although Tom keeps asking himself how Atlanna could have survived the storm, he doesn’t question her heritage.


It’s only on his mother’s deathbed that Arthur and his father learn the truth: Atlanna confesses that she is from Atlantis, a world that until then was thought to be a legend. She also tells Arthur that he shares her ability to breathe underwater and to control all marine life. Arthur’s father encourages him to take on his role as the guardian of the oceans and as the king of the seven seas, so after his father’s death Arthur leaves the lighthouse and accepts his true destiny.


The Hollywood film also explores the origins of Aquaman and his journey to becoming king of Atlantis. Fans of the comic series also learned more about Aquaman’s family and his childhood. At Aquaman’s side there is Mera, who supports him with her hydrokinetic powers – the ability to control water. Everything could have been so wonderful if it hadn’t been for Aquaman’s brother Orm, who sits on the throne of Atlantis and is trying to unite the seven kingdoms against the people who live on the land. In contrast to his brother, Orm despises humans as they do not care properly for the Earth, and it’s up to Aquaman to prevent a huge catastrophe from ensuing.


In the EMP Aquaman Online Shop you’ll find everything your fan heart desires. Show your allegiance to Atlantis with one of the detailed printed T-shirts or transform your home into a miniature underwater kingdom with Aquaman posters and collectors’ figures. Of course, you’ll also find loads of cool Aquaman accessories at EMP, whether you prefer the retro style or designs from the recent film.

Are superheroes and DC your cup of tea? Then why not pay Batman a visit in Gotham City or become part of the Suicide Squad.